Dickinson, Texas
Early History
Dickinson and the bayou, which share the same name, were named after John Dickinson. In 1824 he received a land grant from the Mexican government for the area just north of the present-day location of Dickinson.
Around 1850 a settlement was established along the shores of Dickinson Bayou. By 1860 Dickinson became a stop on the Galveston, Houston, and Henderson Railroad. The town had a post office in 1890 registered under its current name.
Dickinson Land & Improvement Association
In the 1890s Fred M. Nichols, the son of E. B. Nichols, and 8 other businessmen organized the Dickinson Land and Improvement Association to market unoccupied land in the Dickinson area. The primary attraction was the local soil’s proven suitability for growing fruit, cane, berries, and potatoes. Nichols converted 40 acres of his estate into a public park, the Dickinson Picnic Grounds.
For the next 3 decades, large groups came out from Galveston to picnic and holiday on the grounds. A Texas Coast Fair was organized there in 1896, and a harness racetrack where the great harness champion Dan Patch supposedly ran was built to attract more people to Dickinson. By 1911, the Galveston and Houston Electric Railway Company had 3 stops in Dickinson, and prominent Galvestonians had established the Oleander Country Club and built homes there.
Gambling
Gambling became prominent in Dickinson and stayed active until 1957. Clubs included the Dickinson Social Club, the Little Club, and the Rose Garden. In 1957 Attorney General Wil Wilson and the Texas Rangers effectively shut down open gambling throughout Galveston County.

Industrialization
Industrialization and the growth of the oil industry in the Houston and Galveston area after both world wars contributed further to Dickinson’s growth. More growth came with NASA’s establishment in 1962 of the Lyndon B. Johnson Space Center just north of Dickinson in Clear Lake City. The fluctuating population figures of the town reflect these influences. 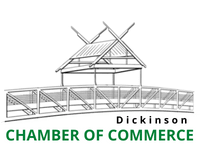 It's a great Chamber day!